The Daily Dog
Puppies 101 - Getting Started

How Long Should A Puppy Stay With Its Mother?

Bringing home a new puppy is extremely exciting! No doubt, you want to have your new furry friend at home with you as soon as possible–but separating a puppy from its mother too early is never a good idea.

In the wild, most canines stay with their natal pack for at least 12 months. Although domestic pups don’t face the same threats from predators and the environment that wild pups do, they still have a lot to learn from their mom and littermates.

So, how old should puppies be to leave mom, and what’s the best age to bring your new puppy home? Read on to find out!

How Long Should a Puppy Stay with its Mother?

At Mawoo, we believe that a puppy should stay with its mother until it is at least eight weeks old. They rely on their mother’s milk for proper nutrition during this time. Puppies also learn a lot from their mothers and littermates during the first eight weeks of life, including essential skills that they will need to get off to the best start and live a quality life.

Selling Puppies Too Young is Illegal in Some States 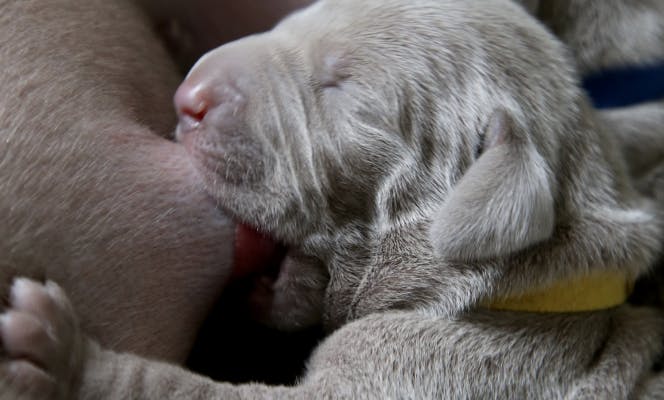 Selling puppies too young is illegal in some states, and for good reason. Although the laws do vary from state to state, 22 states require puppies to be at least eight weeks old before they can be adopted or sold. This is to protect the health and wellbeing of the puppies.

Unfortunately, puppy mills and unscrupulous breeders often try to sell puppies when they are too young, simply to avoid spending money on the care and veterinary costs associated with raising the puppies to the proper age. It’s a vicious cycle of neglect and mistreatment we’re hoping to change.

That’s why we only work with reputable breeders and encourage you to do the same. If more people say no to purchasing puppies who are too young to leave their mom, it could encourage such breeders to change their ways.

When Can a Puppy Survive Without its Mother? 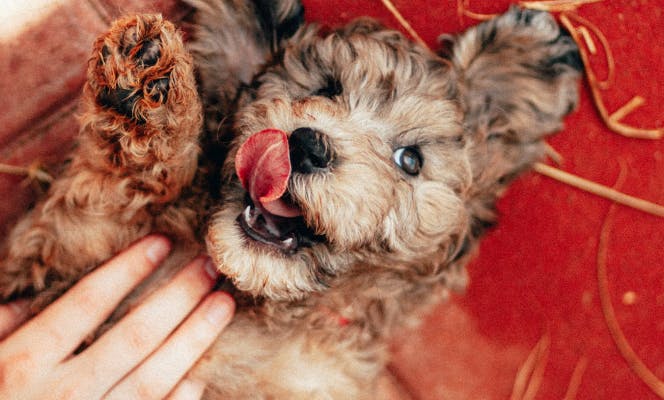 The question remains, how old do puppies have to be to leave mom? The answer depends on the individual puppy and its circumstances. During their first two weeks of life, puppies are completely helpless. They rely on their mother for everything from nourishment to helping them go to the bathroom. At such a young age, their ability to move is limited and their senses are still developing.

When puppies reach four weeks of age, their senses are active and they begin to walk, wag their tails and explore. Their teeth have grown in and they can begin to sample solid foods for the first time. During this state, puppies also start to learn how to interact with their siblings through play and vocalization.

At around six weeks old, most puppies are old enough to survive without their mother, but that doesn’t mean they’re ready to go to their new homes quite yet. At this age, puppies have just started to learn the very basics of house training. They are also becoming more independent from their mom and littermates at this age, and beginning to explore on their own. A good breeder will begin early socialization and start introducing the puppies to common household sounds and activities at this age, too.

Why Should Puppies Stay with Mom Until at Least Eight Weeks? 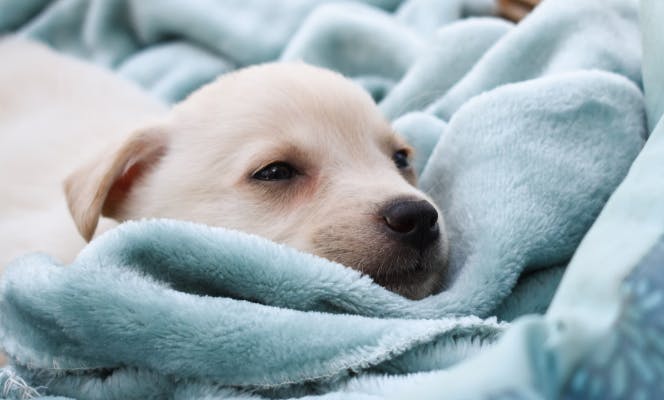 In our experience, puppies get off to the best start if they stay with their mom and littermates until they’re at least eight weeks old. By this time, the puppies have learned to eat solid foods and no longer need their mother’s milk or replacement formula.

Eight-week-old puppies are more aware of the world around them than younger puppies are, which means they are generally more mobile and have been exposed to a variety of sights, sounds, and smells. Hopefully at this point, they’ve also had positive social interactions with people and other pets in their breeder’s home.

Here’s a more in-depth look at what a puppy gains from staying with its mother until it’s eight weeks old.

Transitioning from Milk to Solid Food 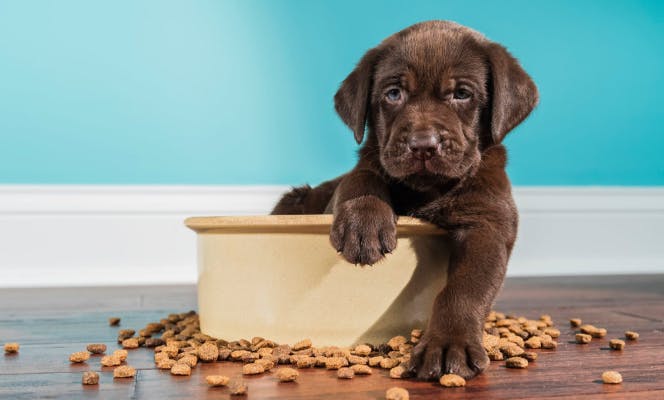 One of the most obvious reasons for a puppy to stay with its mother is to naturally make the transition from milk to solid food. The mother dog initiates the weaning process gradually when her puppies are around three to five weeks old, and this continues until around six to eight weeks.

While the puppy is making this transition, it receives nutrition from its mother as well as from solid food, which is essential for the puppy’s long-term health. This process can be a little stressful for the puppy, so it shouldn’t leave mom until it’s happily eating only solid foods. 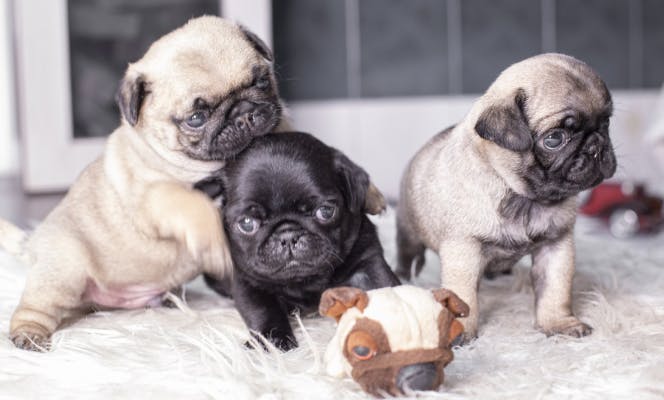 The most important thing in a puppy’s young little life is to be with its mom and littermates! A healthy and happy mama is key to the emotional and psychological wellbeing of the puppy. Simply being with doggy family members is an essential part of the early socialization process. Even the simple act of breastfeeding is important.

Through interactions with its mother, a puppy learns about communication and reciprocity. For example, when the puppy whines, its mother gives it attention. When the puppy misbehaves, the mother shows her displeasure.

A puppy also learns a lot about behavioral boundaries, basic communication and bite inhibition by interacting with its littermates during weeks 6-8 of life. Remember, domestic dogs are social animals by nature.

Being with its mother and littermates helps a puppy feel safe and secure while it learns what life is all about. Giving your new family member plenty of time to learn these lessons will also make the first six months with your new puppyeasier. 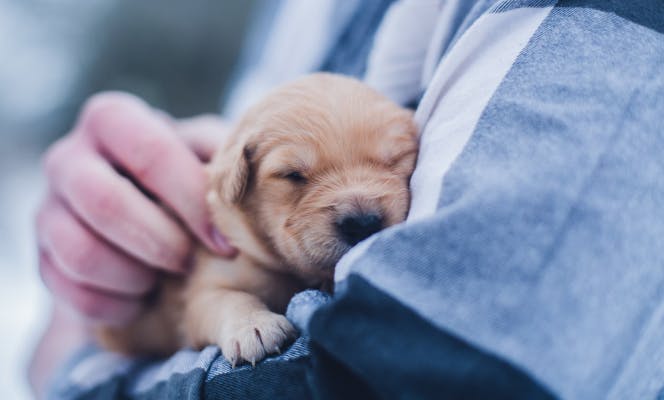 A responsible breeder will also play a major role in teaching your puppy some essential life skills before it goes to its new home. From the time a puppy is born until it goes to its new home, a breeder can ensure that it learns basic house manners and that it has positive social experiences with humans and other animals.

A breeder can also introduce a puppy to things like crate training, car rides, playtime in the backyard, grooming and one-on-one interaction with other humans. This helps a puppy learn to enjoy new experiences, make connections between people and positive emotions, recover from scary new situations, and enjoy being handled.

Experiencing these things for the first time in an environment where a puppy feels safe and secure will help it go to its new home with a sense of confidence. It will also give the puppy the skills it needs to form healthy bonds with its new family members.

The Best Age to Bring Home a New Puppy

The best age to bring home a new puppy can vary based on its breed and the environment in which it lives. Common sense dictates that the longer a puppy stays with its mother, the more opportunities it has to learn valuable life skills and behaviours, and the more time you have to prepare for your new family member.

Although waiting until at least eight weeks is essential, many experts feel that some puppies get off to the best start if they’re left with their mother a little longer. 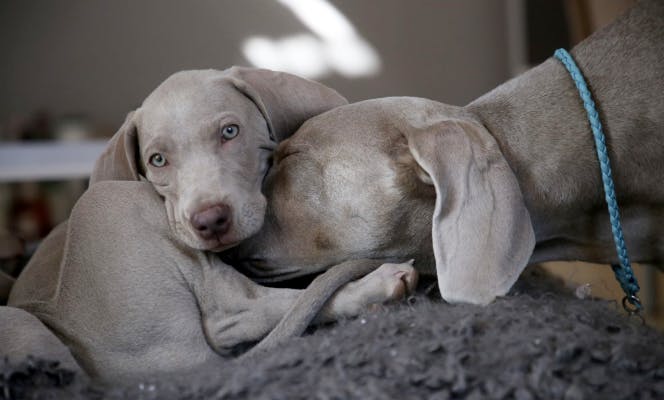 Large breeds like Goldendoodles and Labradors develop faster than small dogs. They are a little better equipped  to handle the physical and emotional stress of leaving mom and going to a new home at 8 - 10 weeks. However, these puppies can benefit from staying put an extra week or two if the breeder is spending a lot of time on socialization and training. 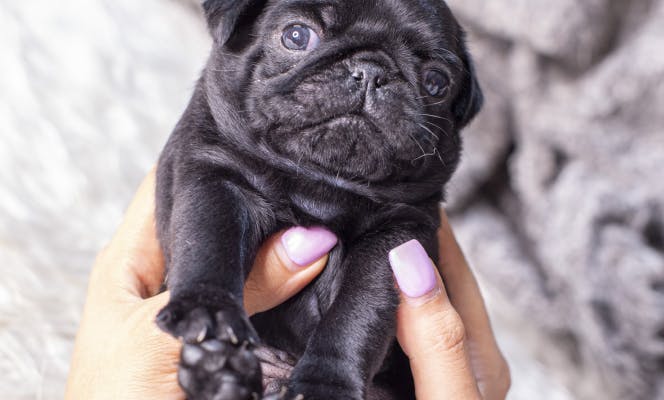 Mini, toy and teacup breeds are often still quite fragile and tiny at eight weeks old. Many breeders will choose to keep these puppies for 10 - 12 weeks to ensure that they are strong enough to handle the physical and emotional stress of leaving their mom and going to a new home. Allowing this extra time can help a puppy to stay healthy and positive during the transition.

At Mawoo, we feel it’s best to consult with your breeder and your vet to decide on the best age to bring your new puppy home. If they recommend waiting a week or two longer, it’s a small price to pay for the physical and emotional health of your new fur baby!

The Risks of Separating Puppies from Mom Too Early

Separating a puppy from its mom too early could lead to physical issues like poor appetite,  increased risk of disease, and failure to thrive. This happens when a puppy doesn’t get enough of the enzymes, hormones and antibodies it needs from its mother’s milk. On top of those health risks, there is the simple fact that suckling is a source of comfort for a young puppy, even after it has begun to eat solid foods.

Furthermore, if the weaning process is interrupted too early, it can lead to behavioural issues for the puppy, including anxiety, possessiveness and a lack of self-confidence. A prematurely weaned puppy will often display poor social skills when it goes to its new home. It may be fearful of new experiences and timid around humans and other animals.

Other dogs often have negative reactions to these puppies because they interact differently, which makes socializing the puppy even more difficult as it gets older. Such puppies may also be slow to bond with their new family members, or they may go to the other extreme and develop separation anxiety when left alone because they lack the ability to self-soothe.

Puppies who go to their new homes before learning essential behavioural lessons can be more likely to bite or to test their boundaries in other anti-social ways. Unfortunately, they often bite harder and more often than other puppies, and their aggressive behaviourcan be more difficult to correct than other dogs’ poor manners.

When is it Necessary to Wean a Puppy Early? 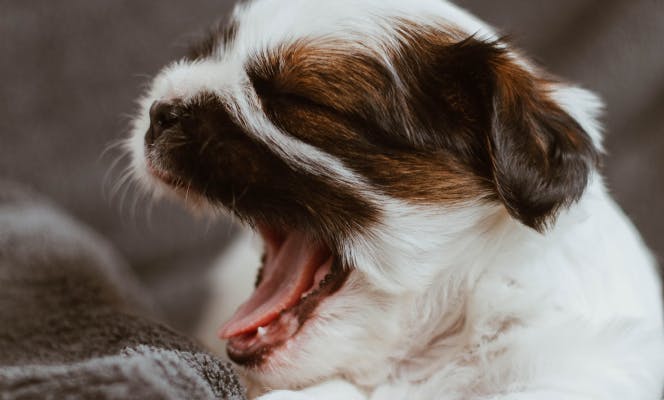 Unfortunately, there can be some circumstances where it becomes necessary to wean a puppy early. Death or sickness in the mother are two of the most common reasons. In cases where the litter is very large, it may also become necessary to wean some of the puppies early for the health of the mother.

If you find yourself in this situation, be sure to consult with a veterinarian to ensure that you're meeting the puppy’s nutritional needs. Providing a safe environment for new experiences and socialization with humans and other animals will also be essential for the puppy’s development.

Are you Ready to Bring Home your New Puppy?

It’s understandable that you don’t want to miss out on one minute of your new fur baby’s puppyhood–but before bringing your new furry pal home, ask yourself, how long should a puppy stay with its mother? Leaving a puppy with its mother until it’s at least eight weeks old is the best move for both of you.

If you’re still on the fence about bringing a new puppy into the family, our Puppy Match Quiz can help you decide which breed will best suit your family and lifestyle. The more you know, the better prepared you will be when the big day comes!

Where is the Best Place to Buy Puppies Online?

How to Finance a Dog

How to Know If a Breeder is Reputable & Avoid Puppy Mills

Any questions? Get in touch!

We are here to support you every step of the way. Our concierge service is here daily to answer your questions!

Chat or speak with our team 9a-9p ET, every day.

Mawoo Pets is a registered entity in USA and Canada.

Sign up and stay up to date with lovely pups, deals, new articles, and more!